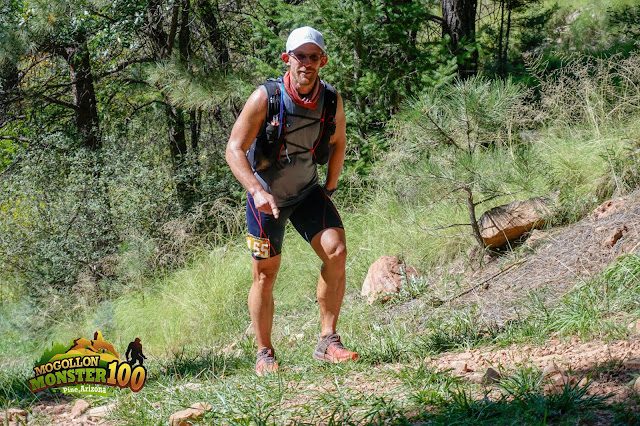 If life were like the old computer game the Oregon Trail, then I probably would have died out there while trying to navigate the mountains and trails of the Mogollon Rim. Yet, life is not like a computer game nor is it like a box of chocolates. At least with the box chocolates you know you're going to get chocolate. To me, life is like running 100 miles on a hard adventurous  mountain course. I suppose, since I started this blog today,  this is my first official unofficial race report.

I woke up Saturday morning knowing I had put in all the work I could in my training, was coming off a second place finish at the Vertigo 52k.  Despite sorting through some remnants of the past, I was focused and prepared. While loading up the car that morning I remember thinking about this annoying bug bite on my left calf and as I said to myself, this thing is annoying, I also thought if that's my biggest problem today I am good.

The energy before the race was electric, the weather was great and as all 100 of us wiggled, shook the arms out, rolled the ankles around, hugged our friends asked one another "how do you feel?" and responded with vague and woefully uncertain "pretty good", and made sure our GPS watches were pinning signal I gazed around and saw an inspired and determined group of folks who in any other context may be viewed as utterly insane.

We were off on an adventure of a lifetime, the Mogollon Monster 100 mile endurance run. Some of us would win, some would lose, some would laugh and some would cry but all of us would be better for having whatever our individual experiences are. With ultra running, it is about the process of individual discovery.

It has been my experience that one can't be sure of "how it's going" in a race like this until it stops going as it should. The first ~18 miles were heavenly.  To those who are unfamiliar, few things are comparable to the Highline Trail as the morning awakens to the day and paints in view the definition of serenity.

I got into Washington Park (Mile 20) and was among the top 10. I was happy with my time but felt just a bit off and knew I should keel back a bit until I picked up my pacer at mile 43.  I can't  say for sure what it was, I had some minor cramping at that point but was not overly concerned with it. If anything, I would say I just felt fuzzy in my head and had to play around a bit with electrolyte/Water balance, which is nothing too out  of the ordinary. My crew captain Renee Stevens and soon to be pacer Kent Warlick caught me as I came in and they had enough positive energy to light up the face of a child who just dropped their cupcake and lost their balloon. Nothing beats the feeling of having some of your favorite people there waiting for you with fizzy water and smiles and food and to take your pack and fill it up. So I fueled up and headed out up the Powerline Trail, which is just a <35%  grade climb up to the rim.

By the time I made it through the Cabin Loop and back to the mile 43 aid station, I was struggling with terrible leg cramping, some stomach issues and a level of fatigue that was not consistent with my training or endurance. I picked up Kent Warlick and we set off slow but with intent to finish the race. I cannot say enough about how Kent managed the next 17 dreadful hours. Everything that could go wrong went wrong. My body was not just under performing but my mind slowly became very foggy, disoriented and confused as we pushed through the night. Kent always had a positive attitude and no matter how far I drifted or how crass I became, he did what a pacer should do, he never once asked if I thought I was going to drop and he never once suggested I could not finish.  We were able to put together some reasonably stable and good segments of running but my body and mind were falling apart every step. Probably the most disorienting and scary part was when my vision went blurry for a good 3-4 hours. I was tripping on rocks and roots and veering off trail frequently. Kent made sure I stayed the course.

We made it into the mile 80 aid station. At this point, despite the adversity I was still in a top 10 spot. I knew in my heart I would not be able to continue at a competitive enough clip to reach my time goals or placing goals. My heart sunk. The doom of DNF'ing surrounded my spirit.  Participants were dropping like flies all day, I was done. How can I do this? I have never had experienced some of the things I was experiencing both physically and emotionally. Everything hurt. My sense of self of was compromised, my body was a pale and broken remnant of what it once was. I got up and we went back on the mountain.  Kent and I set off out of Mile 80 aid station and up Geronimo for the grueling 10 mile segment up the Highline Trail. The devastation set in as I got passed by 4 runners on that segment. Every step felt like the last one. Kent kept me going forward and I found one final push of decent running as the sun came up and that got us into mile 90 aid station. I never recovered from that push.

The last 10 miles 3 of which included one of the steepest and most aggressive 2 mile climbs in the entire race were excruciating. I shuffled when I could, I fell to one knee a couple times on the climb, the blisters and chafe were far beyond anything I want to go into detail about, and I had what felt like zero neuro-muscular output. Total malaise and emotional devastation and confusion. 5 more runners passed me the last 10 miles. I stepped aside and watched my dream of a top 10 finish in a hard 100 miler fade. The combination of the physical and mental exhaustion raked on my insides and out. I crossed the finish line and it was done. I finished 19th. 38 of the 100 runners did not finish. I was broken.

Mike Duer and Michelle Wences were there with hugs they both offered unparalleled care and comfort as I hobbled to the benches and sat down and weeped. I was as broken as I have ever been in those moments.

And there was that bug bite. Through the race, the "bug bite" ballooned. The medic at mile 20 expressed concern and stated "you should immediately get that looked at." Yes, it hurt real bad the whole time. At that point, it somehow managed to open up and so I smothered it in Neosporin wrapped and bandaged it and covered it with a compression sock. It was too late the damage was done. The morning after the race, I woke up in intense pain in that area and the "bite" had become a full blown staph infected abscess. All my symptoms were explained by the doctor.  All the cramping, confusion, stomach issues, and most notably adrenal fatigue are consistent with the effects of a staph infection. The abscess was surgically drained and I have been given a heavy does of antibiotics. It gives me no consolation or solace.

To be honest, I am not far enough along in my understanding of this experience to say why or how I finished the race and I am not sure how anyone with a staph infection comes up with the mental strength to keep going. I am however, certain that if it were not for the support of my pacer Kent, crew Renee and others who were not there, I would not have finished. The experience has jarred me and conflicted me. It was both triumphant and devastating. The story told here doesn't really connect the reader to the full scope of emotions the experience provided. But this much is true, part of the reason I run is to feel and being human means feeling one's feelings and often those feelings are far more difficult to understand than the events that drove them.

In the end, I laughed, I cried, I won and I lost and somehow far beyond my understanding of the human body's capacity, I managed to avoid my first DNF.  We live to have experiences and like ultra running life is full of peaks and valleys open paths and dark alleys.

Popular posts from this blog

May 09, 2019
Overview and Inception On March 23 rd , my dear friend Kent Warlick and I completed the Tucson High Five. What is the Tucson High Five? It is an original endurance challenge to summit the 5 tallest peaks in the mountain ranges surrounding Tucson   : Mt. Wrightson, Mt Lemmon, Mica Mountain, Rincon Peak, and Wasson Peak. The challenge can be done in many iterations or formats. It is our hope that others will be interested in taking on the challenge. The High Five can be done as a fastpack, a multiple day hike, or weekend picnic in the mountains. The story of the Tucson High Five begins with two close friends who dream big. The idea originated from Kent who I asked to share some details about where he got the idea for the five summit challenge. Here is what he shared. During Thanksgiving last year, my partner in climb from Colorado, Daniel Covelli, and I made a trip to Southern California to hike one of the hardest day hikes in America.   San Jacinto (San Jack), also know
Post a Comment
Read more

September 26, 2018
Deep within the often unexplored caverns of the spirit and mind there exists a push and pull that drives internal conflict, strife, struggle, constitution, passion, and perseverance. In the week and days that have passed since the Mogollon Monster 100 Mile Endurance Run, I have sought to better understand the experience and how it relates to my relationship with running and people and other things. Since this is a blog mainly about ultra running and finding peace, it seems like a good venue to explore some of these ideas. The Exploration When an explorer sets off to experience and investigate a new frontier, the other side of the ocean or an island known to exist but has yet to be discovered, there exists and exciting and great unknown and uncertainty. Will the explorer make it and survive the journey, will the ship survive the tumultuous tides of the sea, will the new frontier be hostile, will the new found cave have a buried treasure or other interesting findings? These
2 comments
Read more